On this day in history… 28th October

On this day in history, the 28th October 1886, the Statue of Liberty was dedicated to New York City from France.

It all started 20 years before in 1865 when Edouard de Laboulaye (a French political thinker) had the idea to give America a gift. The ideas was to honour the alliance between France and the United States during the American Revolution.  To get his idea approved he needed to find a sculpture to make his ideas come true. Auguste Bartholdi, a French sculptor supported the idea and was soon selected to be the sculptor.

The statue’s full name is Liberty Enlightening the World and is based on the Roman goddess Libertas. The idea of being liberty in the 19th century was controversial. Many people thought it symbolic of violence and revolution. However, this was not what Laboulaye and Bartholdi wanted. They wanted the monument to be seen as lighting the way, peacefully and lawfully.  In 1871, the Statue was transformed from an idea to reality. It was to be funded, built and presented to the United States.

To be able to build such a large monument Bartholdi required some help with the structure.  Eventually Alexandre Gustave Eiffel, the designer of the Eiffel Tower, came to help. With Gustave Eiffel engineering expertise he designed the statue’s skeletal framework. Eiffel’s design with its iron interior weighs the enormous amount of 200,000 kilograms. 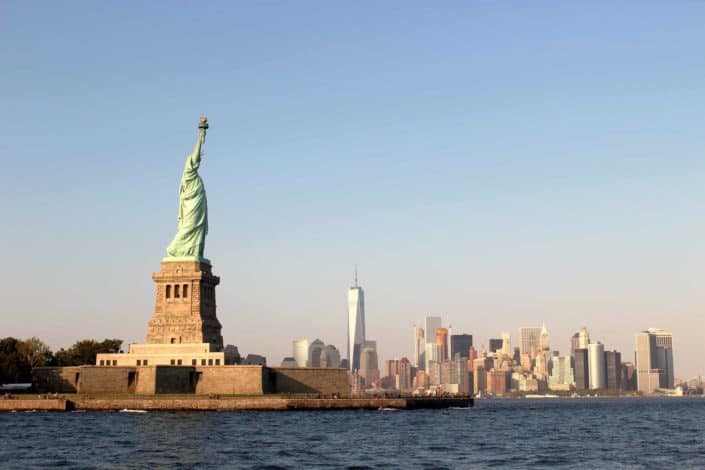 Although France were gifting the statue to the United States. The United States were responsible for funding and building the 89 foot (27 meter) stone pedestal. That the statue would eventually stand on. While this happened France focused on the statue and how to ship the sculpture. It had to be shipped in 350 separate pieces across the Atlantic Ocean.

Fundraising for such a monument took time. America started fundraising in 1882 with a special committee. Their job was to come up with different ideas of how to raise the $102,000 needed. It is believed that over 80 percent of the total had been received in sums of less than one dollar. The pedestal was not completed until April 1886. In the afternoon of 28th October 1886 a ceremony was held in honour of the Statue of Liberty. Revealing the 111 feet (34 metres) tall hand hammered copper statue. Each part of the statue represents something different. At her feet are the broken shackles that represent a woman free from oppression and tyranny. Her right hand extends upwards to hold a 24 carat gold gilded torch. Another important part of the statue is on her head which sits a seven pointed crown. Which symbolises the seven continents and seven seas.

When the Statue of Liberty was revealed it was a shiny brown colour, like a penny. However by 1906 the colour changed to the famous blue-green colour that it is now known for. The colour change is due to the outer layers being covered with hundreds of layers of copper sheets. The copper reacts with the air to form a patina or verdigris, protecting the inner layers from erosion.

If you wish to join the other 4 million people that visit the Stature of Liberty a year, Activ4 School Tours offer a performing arts trip to New York City. To find out more about any of our trips call us today on 01743 467267.