The early bird catches the worm – and sometimes a bit more besides: a living ski legend will soon be rewarding early risers. Skiing “Emperor” Franz Klammer, will be taking to the slopes with “normal” skiers as part of a new promotion. On four dates this winter, the skiing before 9 with Franz Klammer, who celebrates his 60th birthday at the beginning of December, will start at 6.45 at the valley station of the Kaiserburgbahn, where Klammer will be waiting for guests and will also accompany them to a warm-up breakfast. From 07.30 to 09.30 the programme features free skiing with Klammer on the World Cup slope.

A couple of years we hosted an inspection visit in Bad Kleinkirchheim ski resort, for teachers whom had only ever skied in France. We stayed in Camp Royal X which really suited everybody  As well as loving the skiing, standard of accommodation, the fact that there were no French people shouting at them and the lack of queues. They all commented on what good value Austria was compared to France. 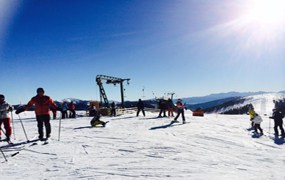 Fantastic!  Bad Kleinkirchheim ski resort has great areas for beginners including some longer than normal “nursery” slopes which give students a very early taste of being “on the mountain”.  Inters and advanced are also very well catered for.  So from nursery through to the 3.5 km Franz Klammer World Cup run, there really is something for everyone.

So why does Bad Kleinkirchheim ski resort work so well?

I guess that it has a lot to do with the people…  The main man over there is Max and he basically makes sure everything runs perfectly!  Depending on which hotel you stay at ski fit will take place either at the hotel, which is nice! Or at the foot of the slopes, which is also great.  The instructors are on hand every morning to greet the groups and most of them stick around at lunch time as well.

Talking of lunch, we have two great options here; hot lunch in one of the restaurants on the mountain or a packed lunch that the students have made for themselves at breakfast.  Fantastic idea, the kids make what they want, so no wastage!  If they do still want more to eat, Bad Kleinkirchheim ski resort comes into its own with the variety of food on the slopes and the fantastic prices!